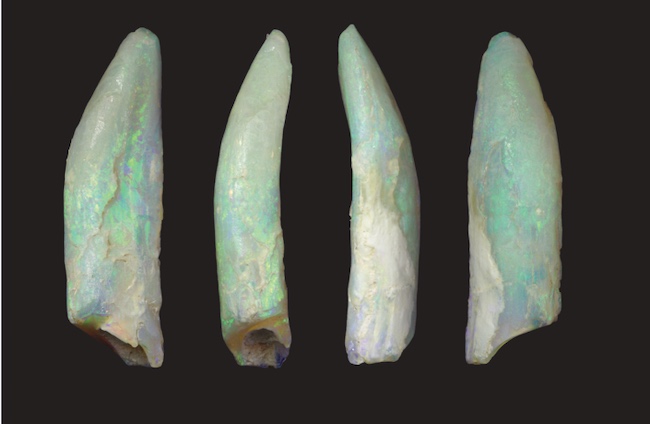 Researchers from the University of New England have analysed several sauropod teeth preserved through opalisation in Lightning Ridge, NSW, discovering previously unknown details about dinosaurs that once lived in the region.

The four teeth were supplied by the Australian Opal Centre – which is located in Lightning Ridge and is home to the world’s premier public collection of opalised dinosaur fossils – and the Australian Museum in Sydney.

They belonged to species including brontosaurus and brachiosaurus, which could grow up to 40m and weigh 90 tonnes.

Australia is the only known source of opalised dinosaur fossils, and all dinosaur fossils found at Lightning Ridge are opalised. While sauropod fossils are commonly found in central Queensland, few had been discovered in NSW.

“Teeth are one of the smallest bones in a sauropod and there is an abundance of them at Lightning Ridge. Although small in comparison to other sauropod fossils, which can be over one metre long, teeth can be incredibly useful in assessing ecology and diversity,” he explained.

Frauenfelder added, “Sauropod dinosaurs don’t have different types of teeth such as molars or incisors, and differing tooth shapes can give us an idea about how many species were living in a particular area. Based on this, we can identify potentially three different species of sauropods that co-existed at Lightning Ridge.”

The findings were published in the journal Lethaia.