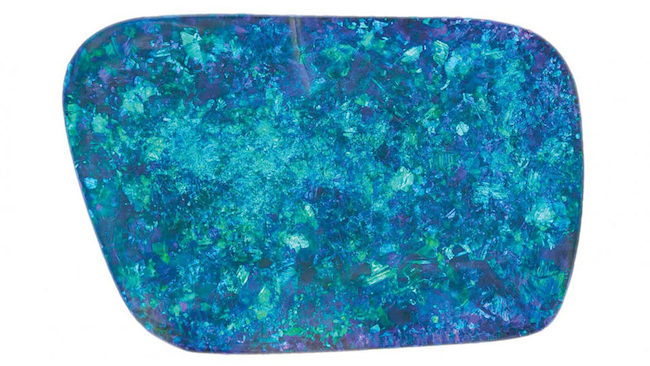 One of the world’s largest black opals, which has been named ‘The Pacific’, is due to be auctioned in Sydney this month.

Found by miner Gerald O’Brien in the legendary opal fields of Lightning Ridge, NSW in 1989, the gemstone was named after the Pacific Ocean due to its vivid blue colour and iridescence.

Weighing 443.56 carats, it was certified as the largest black opal in the world by Guinness World Records in 1990.

While it has since lost that title to another Lightning Ridge specimen, the 11,340.95-carat Sea of Opal, The Pacific is still expected to fetch approximately $700,000, plus a 22 per cent buyer’s premium, when it goes under the hammer on 24 November.

The valuation cements The Pacific’s place among Australia’s finest opals, such as the Virgin Rainbow – which is valued at $1 million – the $675,000 Fire of Australia, and the $1.9 million Olympic Australis, all found at Coober Pedy in South Australia.

Auction house Noble Numismatics, which has offices in Sydney and Melbourne, will offer The Pacific as part of its upcoming sale at the State Library of NSW, describing it as “a once-in-a-lifetime opportunity to own an Australian mineral specimen icon”.

Black opals are the most valuable opal type on the market, as their dark body tone allows for more vibrancy in the play of colour. The majority of the world’s supply is mined at Lightning Ridge, and in 2008 black opal was designated the ‘gemstone emblem’ of NSW by its state government.