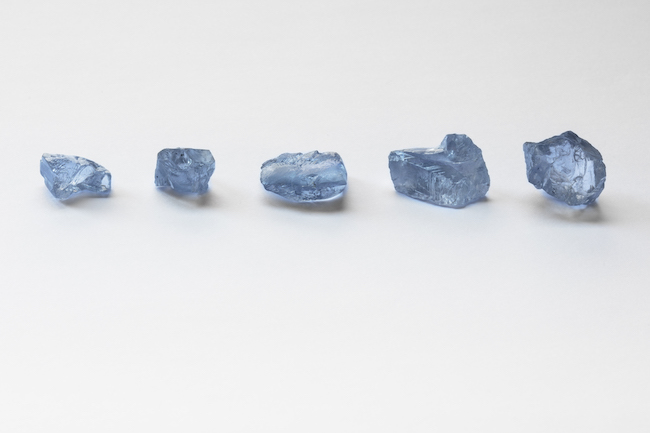 A rare collection of five blue diamonds has been sold for more than $US40 million, while a 14.83-carat stone named ‘The Spirit of the Rose’ has broken the per-carat price record for a purplish-pink diamond.

The blue diamonds weigh 85.6 carats in total and were recovered from the historic Cullinan Mine in South Africa by mining company Petra Diamonds. They have been named the Tetlapa Tala Collection, meaning ‘blue rock’ in the local Northern Sotho language.

De Beers and diamond manufacturing firm Diacore won a special tender of the stones, purchasing them for $US40.36 million ($AU54.82 million).

Notably, Petra Diamonds acquired the Cullinan Mine – best known as the source for the Cullinan Diamond, the largest gem-quality white diamond ever found – from De Beers in 2008.

Earlier this year, the struggling company attempted to sell off its diamond mining assets but instead opted for a debt restructuring arrangement after receiving no “viable offers”.

The Cullinan Mine has produced a number of other notable stones, and is considered one of the premier sources of blue diamonds.

Richard Duffy, CEO Petra Diamonds, said, “The result of this special tender affirms the very high value placed on blue diamonds, which are undoubtedly one of nature’s rarest treasures.”

“We believe this to be the first time that five rough blue diamonds of significant size, colour and clarity have been offered for sale at one time and we are delighted that the collection has been bought in its entirety,” he added.

The FCRF did not publish an Index report for the first two quarters of the year due to low trading volumes as a result of COVID-19 lockdowns. However, the Q3 report indicated that blue diamond prices had declined by less than one per cent compared with the same period in 2019.

Pink diamond prices also declined by less than one per cent overall during the quarter.

Indeed, the Spirit of the Rose – a 14.83-carat pink diamond mined in Siberia by Russian conglomerate Alrosa – was auctioned earlier this month by Sotheby’s in Geneva, breaking the per-carat price record for a purplish-pink stone.

Historically, pink diamond prices have increased by 116 per cent over the past 10 years and blue diamond prices by 81 per cent, according to FCRF analysis.

The Spirit of the Rose pink diamond

Restaurant Workers Should Be Prioritized for the COVID-19 Vaccine. Why Aren’t We?